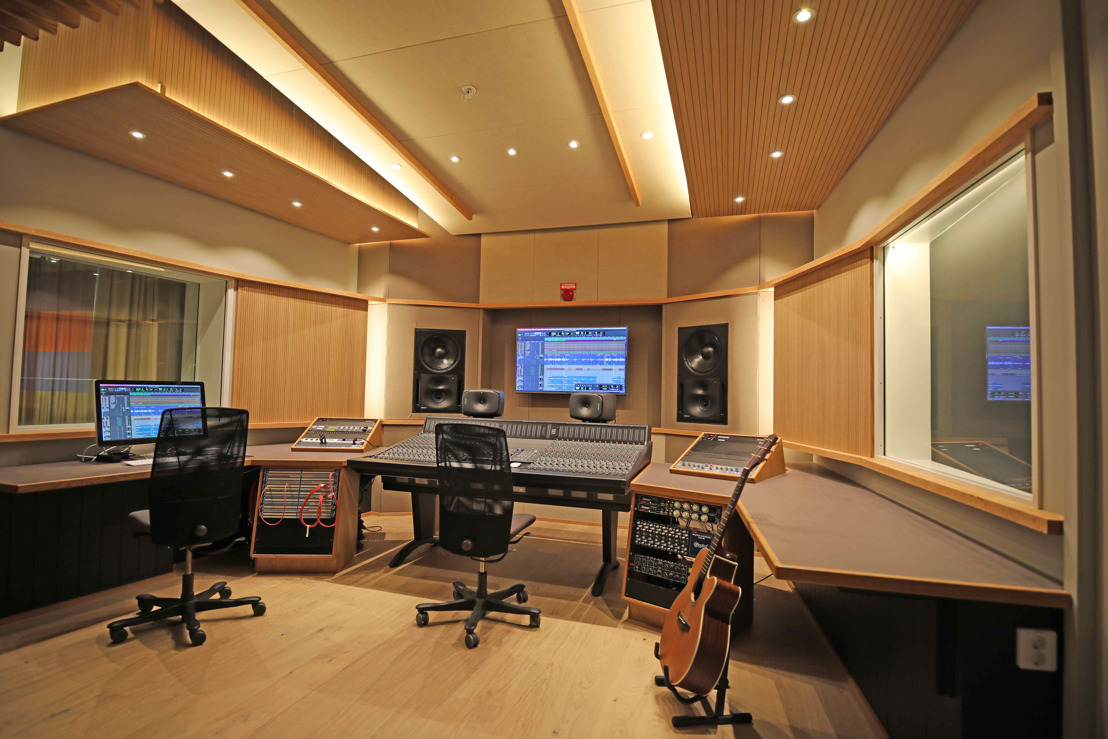 Stockholm, Sweden, November 30, 2021 — Originally founded in 1771, The Royal College of Music, Stockholm (KMH) has been the training ground for some of Sweden’s most celebrated composers and performers for the past two and a half centuries. KMH recently completed a major overhaul of their recording and production suites as part of an extensive fifteen-year renewal project building a new campus. To support their continually-expanding music performance and composition programs with world-class facilities, the school engaged the services of global architectural acoustic consulting and A/V integration firm WSDG (Walters-Storyk Design Group) to design their three main stereo control rooms.

Peak performance
​From the onset, the entire renewal project was designed to give KMH and its students a top-of-the-line facility to serve the needs of the school’s robust performance, composition, and music production curriculum. In addition to new classrooms, practice rooms, and concert halls, this also included recording studios and control rooms that could be utilized for a variety of production applications. “The entire design of the new campus was made to meet the highest international standards,” explained KMH Sound engineer Markus Sjöberg. “For our studio spaces, this meant we wanted the best acoustic performance possible and an aesthetically calm, organic, yet modern look to inspire our students while also providing them with everything they need to do their best work.”

“We were very familiar with WSDG’s expertise and advanced design process, so it was a clear choice to work with them on this project.”

In addition to stellar acoustics and aesthetics, another major objective for the studio design was to draw all of the aspects of the school’s programs closer together. Advanced interconnectivity was required to allow the students and faculty to make the most of the school’s robust concert programming. “We have a very active concert program at KMH – over 400 a year,” said Sjöberg. “Documenting these performances is an integral part of our curriculum, so it was essential that the system design of these spaces matched the acoustics for quality.”

Jaw-dropping results
​The WSDG Design Team on the project was led by Senior Project Engineer Thomas Wenger, and included Partners, Dirk Noy and Romina Larregina. Presented with a nearly completed building, the team was faced with the challenge of designing critical listening rooms that could conform to existing infrastructure and HVAC systems. “Our extensive experience has established  a unique skill set and special tools to draw upon for resolving acoustic problems that arise when designing within existing spaces,” explained Noy. “For KMH, this meant new room geometries that would provide an accurate sonic representation of the sound field throughout the room while conforming to the building’s existing infrastructure.”

The team created a design package that optimized the studio's acoustics by using carefully tuned low-frequency absorbers made of specifically perforated plywood for superior sound in all listening positions. Working on the project remotely, the team expertly utilized KMH’s extensive documentation and measurements for onsite construction by local studio builders Studiobyggarna AB. “We designed the new studios for excellent Left/Right imaging and also to compensate for extensive low-end frequency problems that they were experiencing inside the rooms,” explained Larregina. “KMH gave us very detailed feedback on the rooms which made the work run very smoothly, and ultimately produced results we’re incredibly proud of.”

The completed control rooms provide KMH’s students with a variety of useful recording and production environments, including Studio 1 – the largest and most versatile, Studio 2—which features an analog console and is optimized for students to work on their personal projects, and Studio 3 – a multi-purpose mixing room designed for streaming and broadcast work. All three are connected with advanced Stagetec and DANTE networks that allow them to be used together, or with any of the school’s major concert halls. Now officially in use, the finished studios have had an immediate impact on the school’s student body and faculty and have quickly become favored spots on campus. “The sound quality and vibe make it a very special place to be creative,” Sjöberg said. “I’ve spent my entire life in recording studios, and this is by far the best sounding room I’ve heard anywhere in the world.”

“It’s always hard to know what to expect on a project like this, no matter how talented the designers are, but our jaws just dropped the first time we heard music from the main monitors,” he concluded. “The improvement in sound quality was so dramatic we couldn’t possibly hope for anything better. “

For more information about Royal College of Music in Stockholm, please visit: http://kmh.se/