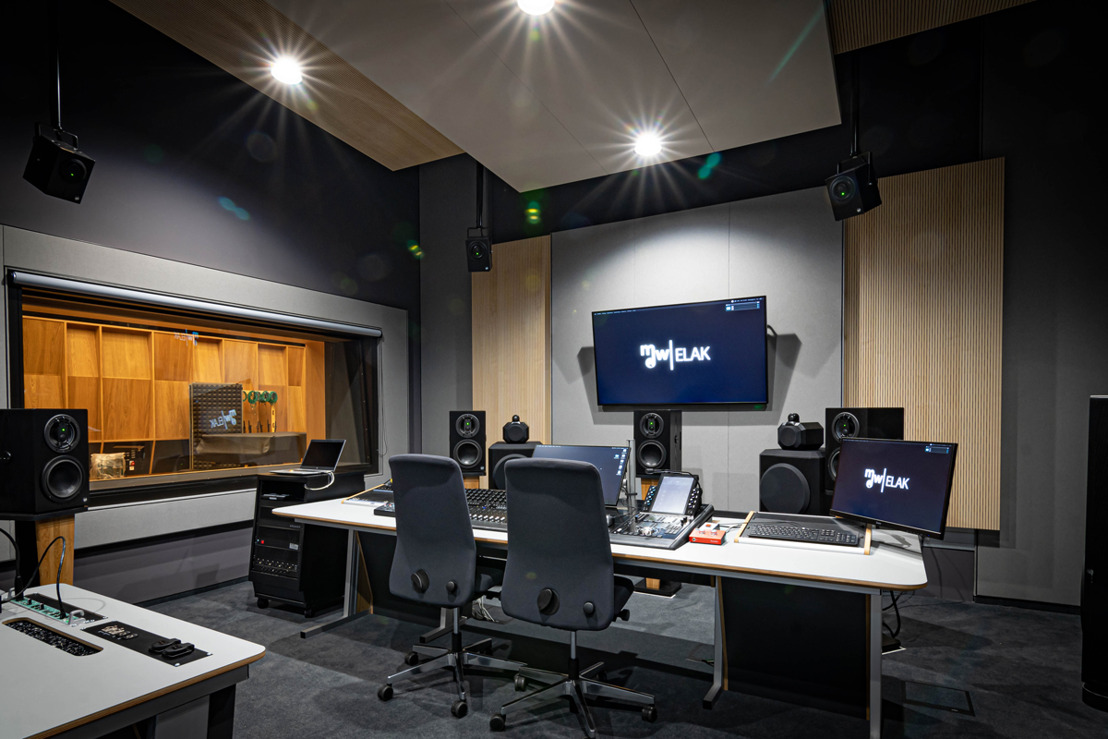 Vienna, Austria, February 7, 2020 — For more than two centuries, The University of Music and Performing Arts of Vienna (MDW) has been a beacon of forward-thinking arts education and one of the most respected institutions of its kind in the world. MDW recently announced the opening of The Future Art Lab (FAL), an ambitious, state-of-the-art complex designed to meet the rapidly expanding scope of its music composition, audio engineering, and film production programs. To ensure that its students would have access to the finest creative spaces available at FAL, MDW commissioned the services of architectural firm PxT (Pichler & Traupmann Architekten) for the design of the facility and architectural acoustic consulting and media systems engineering firm WSDG (Walters-Storyk Design Group) for the design of the complex’s recording studios and sound design labs.

A collaborative creation complex
​The concept for FAL was driven by MDW’s commitment to providing the best possible educational infrastructure for its students, both present and future. Chief in these concerns was anticipating the needs of emerging multimedia formats while also encouraging working synergies between its various programs within a centralized location. “FAL was envisioned as a place that could provide the best possible collaborative learning environment for our students,” explained Senior Lecturer Thomas Lang, Tonmeister and head of the Audio-Video-Center of MDW. “The goal was to unite these creative departments within a single building and provide them with a range of inspiring production environments.”

The multi story, 6,200 m2 complex is home to MDW’s Department of Piano, Department of Composition, Electroacoustics, and Tonmeister Education, Artistic Research Center, and the Film Academy of Vienna. WSDG was tasked with creating a full interior acoustics and system design package for the entire complex that could accommodate the diverse needs of all of these programs. The design team was led by WSDG Partner, Dirk Noy and included architectural design by Project Managers Breno Magalhaes and Alan Machado, room acoustics by Partners, Gabriel Hauser and  Flavio Gallacchi , and A/V systems design by Partner, Michael Chollet and Senior Project Engineer Thomas Wenger. The interior acoustical buildout was realized by Team Loeffler and Hutter Acustix, while Salzbrenner’s system integration team was locally led by WSDG Vienna Representative Mario Reithofer.  “The scope of FAL required every corner of our combined expertise in acoustics, specialized architecture, and systems engineering,” said Noy. “The multidisciplinary team within MDW and other collaborators required a substantial amount of fine tuning and coordination  in shaping these spaces and the infrastructure within.”

The range of room profiles includes multiple recording studios, live rooms, sound design labs, and a theater for producing and screening film and video projects. These spaces also needed to include both analog and digital workflows, multi-channel integration with Dolby ATMOS, and be configurable for a wide variety of multimedia production applications and educational needs. “The diversity of spaces required many different disciplines to come together successfully,” explained Senior Lecturer Lang. “We were familiar with WSDG’s work and were glad to have their support on bringing FAL together.”

The future of multimedia production
​The basement level of FAL is its main recording complex, consisting of nine production studios, and a pair of shared live rooms. Audio Control Rooms A, B, and C are the main control rooms, and they are attached to the large live room and drum booth. Control Rooms B and C are focused on entirely digital and analog workflows respectively, while A has a hybrid system of both and a full Dolby ATMOS System. The east wing holds a row of teaching studios with seating for up to six students and are configurable for a variety of activities and equipment layouts . This row also includes an Experimental Studio equipped with vintage modular synthesizers and tape machines and a Film Mixing Studio equipped for Dolby ATMOS. “One significant challenge was the necessity to redistribute and integrate all of the sometimes particularly exotic existing equipment into a brand new facility-wide Dante network infrastructure. The resulting variety of workflows  encourages MDW’s students to experiment and create in multiple formats,” said Noy.

The ground level consists of several spaces designed for the needs of the Film Academy of Vienna, including a Dolby ATMOS-equipped movie theater with a pair of projectors – one for educational needs and one for cinema-quality projections. In addition to this, there is a two room Sound Design Suite on the first floor and an additional Control Room designed for use with the university’s concert hall. FAL is also equipped with a wide-ranging audio network, ensuring that all of these spaces are interconnected for full collaborative use. “The future of multimedia production requires a high level of flexibility and collaboration between various audiovisual mediums, so it was incredibly important to MDW that there be high-bandwidth systems integration with a wide configurability in all of the production spaces,” said Noy. “WSDG’s expertise in these areas enabled us to design exactly what they needed to ensure that their students will be able to utilize all of these spaces together seamlessly.”

With the facility officially open to its students, FAL’s faculty and staff have already seen an impact in their creative output. “We’ve seen a correspondingly greater exchange between the instrument classes, sound master students, composers, and the Film Academy which has resulted in intensive collaborations between the students,” said Judit Varga, Composer & Head of the Department for Composition, Electroacoustics, and Tonmeister Education, “The state-of-the-art studios, control rooms, and editing rooms offer an optimal educational environment that is truly unique.”

“I believe that FAL catapults the MDW to the forefront of Tonmeister education globally,” concluded Noy. “We’re proud to have been able to play a role in its creation and raise the bar for arts education worldwide.”

ABOUT THE MDW
​The mdw – University of Music and Performing Arts Vienna is one of the world’s largest and most renowned universities for music, theater and film. Over 3,000 students from more than 70 countries enjoy their education in 115 disciplines in the fields of music, performing arts, science, research and paedagogics. The mdw’s 25 institutes include the Max Reinhardt Seminar and the Vienna Film Academy.