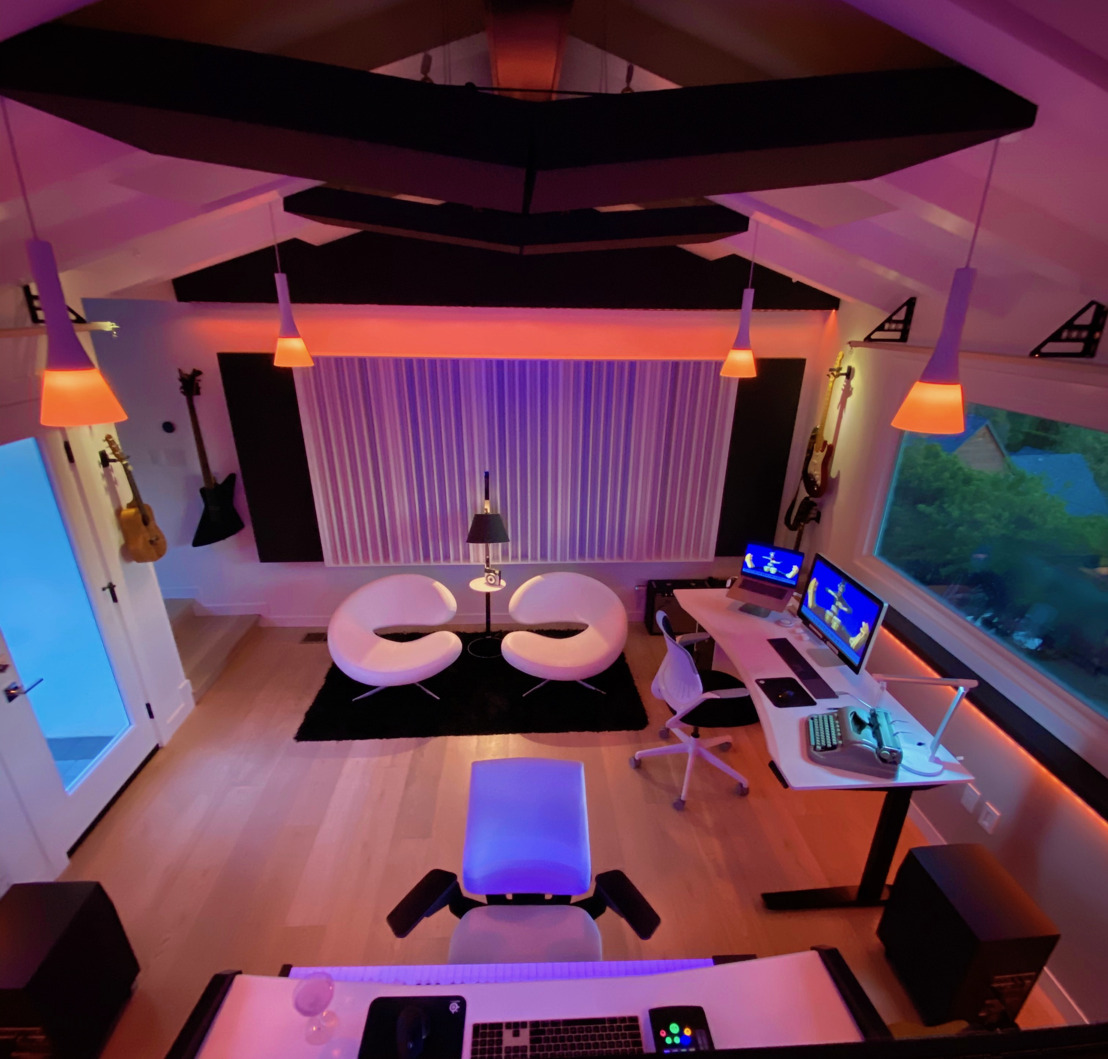 Engaging WSDG to design his new studio, Pietsch hosted an early 2019 on-site visit by WSDG Partners/Project Manager, Matthew Ballos and Acoustic Engineer, Andy Swerdlow. ​ ​ Extrapolating a concrete design program from their findings, the team soon provided Pietsch with a floor plan and presentation drawings that maximized the production, recording, mixing and listening potential of his studio site. ​ Pietsch and his three-man construction team went to work on the studio build-out, framing, sheet-rocking the CR/ composing room and fully isolating the compact vocal booth. ​ In early 2020, the ScooterMusic Studio was session ready.

"I wanted to create something very different from my previous studio,” Pietsch explains, “Not just in size, but in look and feel. ​ I went with a clean modern all white look. ​ The lighting is Philips Hue smart lights, and white is the absolute best surface to reflect color. We also installed Nanoleaf Canvas lights in the vocal booth, which although small, is completely floated and thanks to some clever workarounds eliminates the need for a music stand or floor-standing mic. The ability to change lighting moods in sessions is always a fun/creative way to inspire the work. We also deployed a camera in the main room so singers can maintain eye contact with us on a monitor and vice versa. Music and lyrics are displayed via iPad. ​ In contrast to my previous facility, this new studio is attached to the house, a whole other thing to get used to. But, thanks to WSDG’s meticulous soundproofing and construction design, my near 100db doesn’t bother anyone.”

“In addition to a wide range of film and TV programming underscore and theme composing, I write and produce songs with other artists and also do a considerable amount of theatrical playwriting and musical composing. I needed a truly flexible production environment and that’s exactly what I got,” Pietsch says.

WSDG partner/project managers Matthew Ballos and Andy Swerdlow collaborated remotely from the firm’s Highland, NY office on the studio’s acoustic plan. ​ They specified the installation of six custom ‘split joist’ suspended ceiling clouds and six additional clouds flush mounted to the sloping ceiling walls. ​ “This studio is unique from a number of perspectives,” Ballos remarked. ​ “Situated in the hills above LA’s Studio City, it’s graced by large picture windows providing amazing pool and neighboring hillside views and brilliant natural light.” Swerdlow adds, “The studio building was skillfully sighted not only from the view perspective, but also to provide a surprising sense of isolation even though it’s in the midst of a densely populated area. ​ ​ Scooter's construction team did a terrific job, and because they adhered scrupulously to our acoustic plan they created a warm, tight room that sounds exactly the way we envisioned it.”

In June 2022, WINDFALL, a new play by Scooter Pietsch will be produced at Sag Harbor, NY’s Bay Street Theater. ​ Originally directed by Jason Alexander, the comedy premiered in a sold out 2016 run at The Arkansas Repertory Theater. ​ Productions of earlier Pietsch plays include performances by Tony & Emmy-winning star Bryan Cranston.